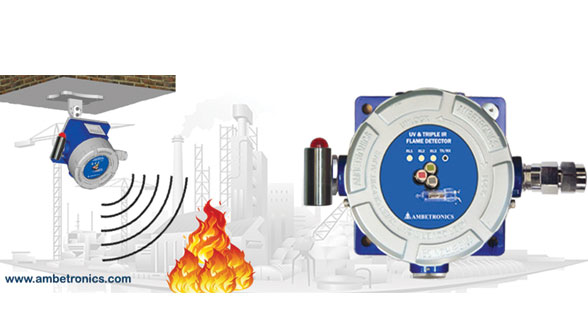 “FIRE” – The most feared industrial hazard! It can happen within two minutes — first a lick of flame, then it spreads as it searches for fuel. The next thing you know; you could have a life-threatening fire on your hands.

But these catastrophic fires can be prevented with simply monitoring one of the 3 physical properties of Fire: Heat, Smoke and a FLAME.

Eyes being faster than the nose, in the event of Fire, Flame Detector is most suitable solution as it responds immediately. In addition, smoke and heat from fires can dissipate too rapidly or accumulate too slowly for effective detection. In contrast, because Flame Detectors are optical devices, they can respond to flames in less than a second.

The new FL – 4400 UVIR Flame Detector uses single UV and triple IR sensors to detect the flame’s electromagnetic radiation in the ultraviolet (UV) and infrared (IR) wavelengths depending on the fuel source. In response to the flame radiations captured by UV and multi-IR sensors, a series of pulses is generated that is converted by the detector electronics into an alarm output.

The FL – 4400 UVIR Flame Detectors can be connected in 4 different ways to provide varying degrees of information:

Examples of few installation areas include:

says, “We are very excited to have launched this state-of-the-art Flame Detector that gives fast and reliable detection in the event of Fire. Our detector is designed to give long distance detection with remarkable protection and monitoring features that can be found in the market.”

Matrix to Showcase its Innovative Security Solutions at IFSEC India 2022

All injuries can not be prevented

The irony and agony of human error

Innovations in security and safety systems

Never drop the ball on in-store customer experience: how…