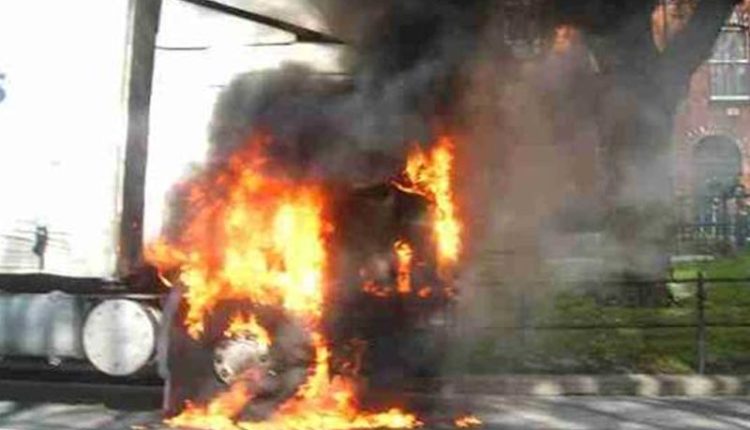 1.0 INTRODUCTION:
Fire pose a major threat to various occupancies in India. Almost every day some fires are reported by media across the country. These fires not only resulted in the loss of many precious life and injuries to many but also inflicted heavy property loss.
During the last two decades there was a vibrant growth in the construction activities in India, especially in high rise buildings. Because of its peculiar nature, fire in residential buildings, in particular, high rise buildings, become more complex and the salvaging operations become more difficult and sometimes even resulting in many deaths and huge property losses. The rapid modernisation of Indian Industry have made the scenario more complex. Awareness towards fire safety had not been quite forthcoming. This article will focus on the overall scenario on the existing fire safety regulations in India and the effectiveness of these regulations for combating the potential fire hazards.

Regular fire services in India was established about 215 years back. The service was first established in Bombay in 1803, followed by Calcutta in 1822, Delhi in 1867 and Madras in 1908. As per the report released by the Ministry of Home Affairs in 1997, there were 1754 fire stations with 5149 fire appliances/vehicles and 50,730 fire professionals are functioning PAN India. In addition to above, there were 278 trailer-made fire stations operating exclusively in industrial sectors. According to the Annual Report 2009-10 of Ministry of Home Affairs, in 2009, Centrally Sponsored Scheme on Strengthening of Fire and Emergency Services in the Country has been approved by the Government at an estimated cost of Rs.200 crore during the Eleventh Plan Period. The State Governments will also contribute Rs.40.23 crore as their share. The overall objective of the Scheme is to strengthen fire and emergency service in the country and progressively transform it into Multi-Hazard Response Force capable of acting as first responder in all types of emergency situations. Under the Scheme, additional 277 Advanced Fire Tenders, 1,146 High Pressure Pumps with Water Mist Technology, 573 Quick Response Team Vehicles, and 1,146 Combi Tools for Rescue will be provided at District Headquarter Fire Brigades in the country. To find the actual requirement of firefighting and rescue equipment, the Ministry of Home Affairs, has decided to carry out Fire Risk and Hazard Analysis in the country.

The main objective of NBC is to specify measures that will provide that degree of safety from fire, which is practical and can be reasonably achieved. The Code insists upon compliance with minimum standards of fire safety necessary for building occupants and users. For ensuring compliance of fire protection equipment/installations to the laid down quality requirements, it is desirable to use such equipment/installation duly certified under the BIS Certification Marks Scheme.

The NBC classify the buildings into the following 9 groups:
These groups have been subdivided into various categories. The NBC also deals with three types of fire zones and four types of constructions.

The Part 4 (Fire and Life Safety) of NBC, which contain the fire safety norms through detailed provisions on fire prevention, life safety and fire protection. The fire protection, which not only deals with fire prevention and fire protection but also gives guidance by specifying the standards for construction, plumbing, electrical installations including wiring, lighting, ventilation, heating and air conditioning, safety sanitation, active and passive fire protection systems, etc. It mentions the restrictions of buildings in each fire zone, classification of buildings based on occupancy, the demarcation of fire zones, limitations of height, types of building construction according to fire resistance of the structural and non-structural components and other restrictions and requirements necessary to minimise danger to life from fire, smoke, fumes or panic before the building can be evacuated.

The Code recognizes that safety of life is more than a matter of means of egress and accordingly deals with various matters which are considered essential to the safety of life. The Code therefore covers provisions relating to means of egress covering various components thereof namely exit access, exit and exit discharge. It also covers provisions relating to fire protection of various occupancies through portable and fixed firefighting installations (Refer Table 7 of NBC 2016).

2.2 State Regulations:
By and large, the State fire prevention and fire safety act & rules complement the National Building Code. Many of the NBC Code provisions have been incorporated by various State Governments and Local Bodies in their own building regulations. For example, the acts & rules enacted by states like Maharashtra and Gujarat are aimed to improve overall status of fire safety measures in their respective states. Some of the Acts/Rules regarding fire prevention and fire protection enacted by various State Governments are listed in Table 02. It may be seen from Table 02, that some of the State Governments are yet to update their Act and Rules.

Often a question has been raised by many that who will be responsible for providing the required fire protection and prevention system in a building or in an occupancy. The acts and rules enacted by the State of Maharashtra has well defined on these points. According to Section 3 of the Maharashtra Fire Prevention and Life Safety Measures Act, 2006, the developer, owner, occupier or whatever name called shall comply with all the fire and safety measures adhering to the National Building Code of India, and as amended from time to time, failing which it shall be treated as a violation of the Act. It means that the onus of maintaining the fire safety installations in a building or in an occupancy is the responsibility of the owner or occupier.

2.3 Related Regulations:
Apart from the specific State Acts and Rules stated above, a number of legislations are available on matters relating to fire prevention, fire protection and some of them are listed in Table 03. Amongst these, the Factories Act and State Factories Rules are important ones. The Section 38 of the Factories Act, 1948, emphasises, the obligations of the occupier, which include (i) to adopt all practicable measures to prevent the outbreak and spread of fire, (ii) to provide safe means of escape, (iii) to maintain the firefighting equipment properly and (iv) to familiarise all the workers with the means of escape during fire and train them in steps to be taken in a fire accident. The Section 37 of the Factories Act, 1948, also prescribes detailed measures to prevent explosions hazards. The State Factories Rules, framed under the Factories Act, have prescribed in detail, all the steps to be taken to prevent fire hazard.

3.2 OISD Standards
Oil Industry Safety Directorate (OISD) is a technical directorate under the Ministry of Petroleum and Natural Gas of Government of India, who formulates and coordinates the implementation of a series of self-regulatory measures aimed at enhancing the safety in the oil & gas industry in India. OISD had issued a number of standards and the important ones are: OISD STD 114 (Safe handling of hazardous chemicals); OISD STD 116 (Fire Protection Facilities for Petroleum Refineries and Oil/Gas Processing Plants); OISD STD 117 (Fire Protection Facilities for Petroleum Depots, Terminals, Pipeline installations & Lube oil installations).

4.0 COMPLIANCE:
Many commercial and residential buildings in particular high-rise buildings, have been found flouting fire safety norms. Many occupiers or societies do not bother to conduct regular maintenance of the fire prevention systems installed in their buildings.
Though Fire Safety Audit is found to be an effective tool for assessing fire safety standards of an organization or an occupancy, there is no clear cut provisions in any of the fire safety legislations in India, regarding the scope, objectives, methodology and periodicity of a fire safety audit. However, the NBC 2016, recommends for periodical fire safety inspection by the key personnel of the occupants of the building to ensure fire safety standards.
As far as industrial buildings, are concerned, the statutory authorities like State Factory Inspectorate, insist for fire safety audit by external agencies, depending on the type of activity and the nature of the materials handled in the building.
Readers would like to know the provisions provided in the Maharashtra Fire Prevention and Life Safety Measures Rules, 2009, framed under the Maharashtra Fire Prevention and Life Safety Measures Act, 2006. These rules made it mandatory for building owners and residents to conduct half-yearly fire safety audits and submit the report to the fire department. No doubt, it is a good measure and other states too, can follow this. However, entrusting the responsibility of conducting the fire safety audit to the ‘Licensed Agencies’, has created some confusions, because the same agency has also been entrusted with the work of (i) installations of firefighting systems in an occupancy with a certification under Form ‘A’ and (ii) carry out the maintenance of firefighting systems and issue half-yearly certificate under Form ‘B’ in every January & July.

In practice, Form ‘B’ certification is regarded as Safety Audit, which is not at all a right thinking. Perhaps, this arrangement has resulted in diluting the scope and methodology of the audit itself. Moreover, entrusting the audit work to the same ‘Licensed Agencies’, who had either installed or carried out the maintenance work of firefighting systems in an occupancy, is not at all justified. It is also doubtful whether the so called ‘Licensed Agencies’ have the required calibre / expertise in conducting an effective fire safety audit. So in effect, it seems that the fire safety audit has become a mere ritual.

5.0 CONCLUSION:
Hazard Identification & Risk Assessment (HIRA) can be focused to identify potential hazards. A comprehensive fire safety audit can address the inherent fire hazards associated with the day to day activities in an occupancy and recommend measures to reduce the potential fire hazards.

In India, although there are many rules and regulations, codes and standards related to fire safety, these are seldom followed. Laxity in following fire safety measures caused many major fires in various occupancies and some of them even resulted in catastrophes. It was observed that most skyscrapers in Mumbai continue to overlook the fire safety norms compliance certificate. Several prominent high rises in New Delhi are at a high risk of turning into fire traps. Most high rises in and around Connaught Place don’t have fire safety certificates. About 90% buildings in Chennai are fire traps.

If you want to reduce the fire incidents in the country, Fire Safety Audit should be made mandatory for all over India and the audit work should be entrusted to Third Party Agencies, who have expertise in it. It is reasonable to have a fire safety audit in every year in every occupancy. Above all, the success of fire prevention and fire protection mainly depend upon the active co-operation from all personnel in an occupancy. Remember, prevention is better than cure.