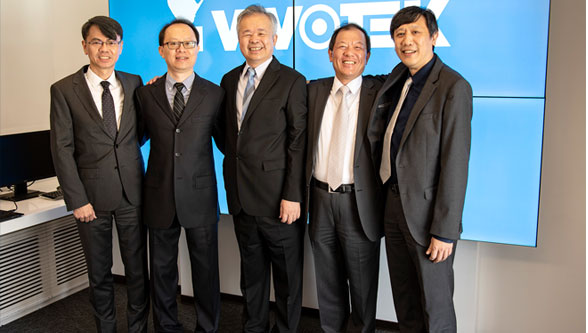 The former Chairman Mr. Owen Chen founded VIVOTEK Inc. in 2000, building on his profound experiences in Telecommunication research and development. Under Mr. Chen’s leadership, VIVOTEK moved from technology licensing to the development of IP surveillance systems and focused on 3 core technologies: video, voice, and communication. He insisted that research, development, design and manufacture all take place in Taiwan and developed practices of Own Brand Manufacture (OBM) and Own Design Manufacture (ODM) from the outset. Under his leadership of over the past two decades, VIVOTEK held its Initial Public Offering (IPO) on the Taiwan Stock Exchange, expanded its global footprint into over 116 countries and established branch offices in 6 countries. With deep roots in Taiwan, VIVOTEK has grown into a global company of 1000 employees. The Company has ranked as Taiwan’s top IP surveillance company and is the only Taiwanese company among the top 20 in the global security market.

Of his company and its history, Mr. Owen Chen said: “Over these two decades, we have strived to win this marathon. Now, this marathon has become a relay race. To overcome existing challenges, passing on the torch to reshape VIVOTEK is imperative. Facing the fierce competition of globalization, the company decided to partner with Delta Electronics in 2017. Combining our strengths, VIVOTEK is able to advance development in technology, channel penetration and operation efficiency. I will remain on VIVOTEK’s board of directors. In this way we can retain and continue to build a sustainable business in VIVOTEK.”

Bill Lo, the new Chairman of VIVOTEK, now serves as the General Manager of the Building Automation Business Group at Delta Electronics Inc. Before joining Delta Electronics in 2017, he worked at IBM for over twenty years with proven track records in international business development, customer service, and coordination capability. Mr. Bill Lo stated, “I’m very proud to serve in my new position as Chairman of VIVOTEK. Security and video surveillance are such critical aspects of building automation as they go beyond and extend diverse applications in smart cities, smart retail and smart transportation. I will work side by side with VIVOTEK’s team; together we can maximize and synergize our two companies.”

For more information about VIVOTEK and its comprehensive product line, please visit www.vivotek.com.

Aquila coated gloves for non-medical use

Honest Paws to Donate 30% of Proceeds to Local Animal Shelters

Worried About COVID-19, 6 in 10 Americans Did Not Visit Their Doctor